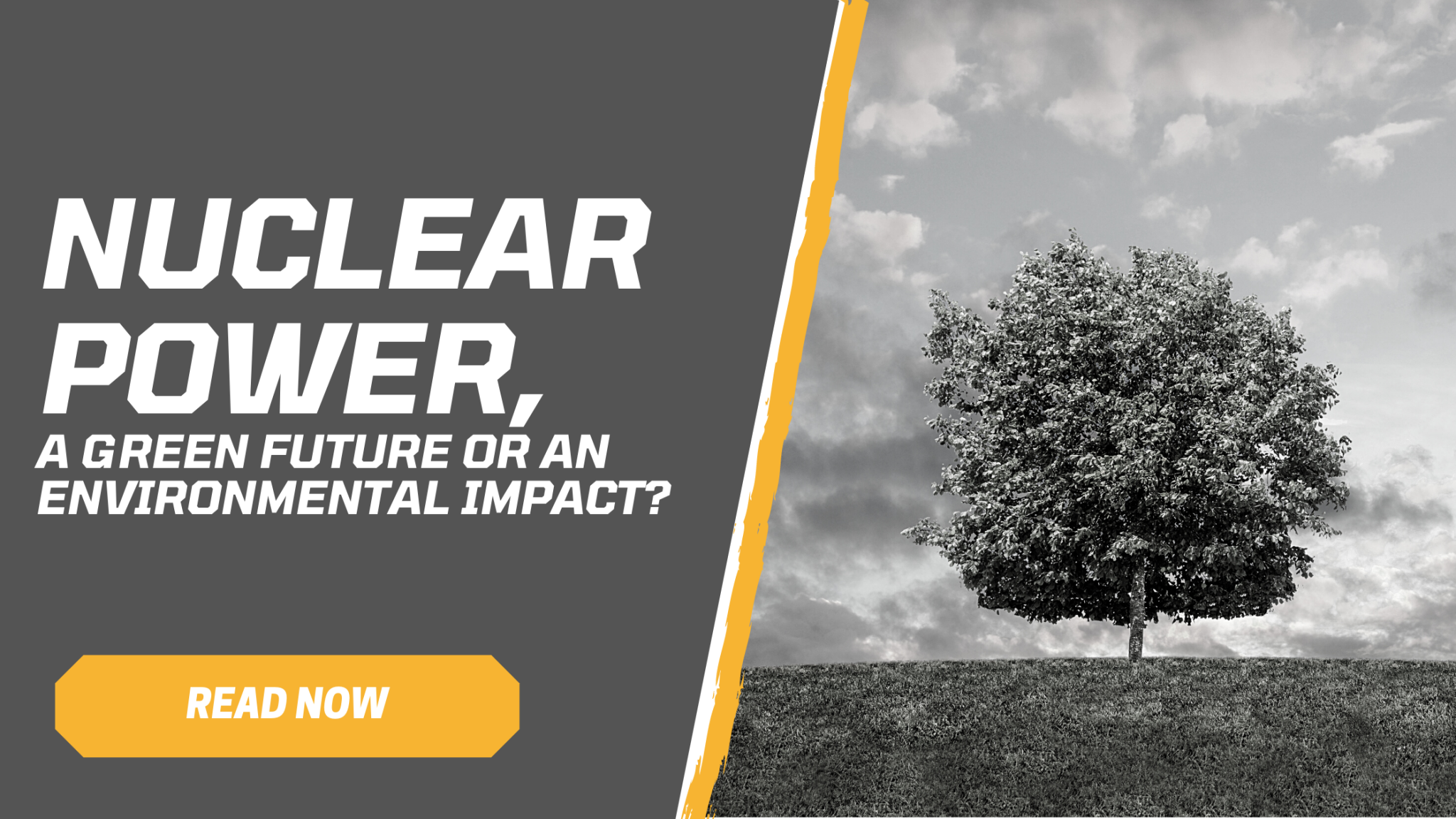 Nuclear Power – a green future or an environmental impact?

How green do you view nuclear power? In a survey of just under 2000 people, nearly half neither supported nor opposed nuclear energy with what they know about it, so we’re hoping to shed some light on the details and processes of the industry. While some view it as a dangerous and therefore unsafe process, we should fully understand the pros and cons before making an opinion.

Granted, when an accident happens then it has the potential to be far worse than many other renewable resources like solar panels and wind farms, however, there are vast preventative measures in place to avoid such events. Three Mile Island in 1979, Chernobyl in 1986 and most recently Fukushima in 2011 have all caused uncertainty regarding the use of nuclear power.

So how does the nuclear power generation process work?

Small amounts of uranium are held in cylinders where neutrons are fired at in order to split the atoms and causing a chain reaction which generates heat.

The water passes through the reactor vessel where the chain reaction heats it to 300°C. To keep the water from evaporating a pressuriser applies around 155 times atmospheric pressure.

A pump circulates the water from the vessel to a steam generator.

The pressurised hot water flows through thousands of looped pipes. A second stream of water under much less pressure flows around the outside of the hot pipes, boiling it into steam.

The steam passes through and spins a series of turbines at around 3000 rpm, converting the steams heat energy into mechanical energy. A shaft connects the turbines to a generator which uses an electromagnetic field to convert that into electrical energy.

A transformer converts the electrical energy into a high voltage for the grid.

Using power lines to connect homes and business to the national grid.

Back at the reactor, the steam is passed over pipes of cold water pumped in from the sea, which cools the steam and condenses it back into water to be reused.

There is no dependency of natural weather in order to produce electricity unlike renewable sources such as wind and solar, meaning there is constant generation of power as opposed to the intermittent sun and wind. This consistency allows for homes to be uninterrupted and have easy access to electricity whenever needed. In 2016 nuclear power plants generated almost 20% of the United States electricity with an average capacity factor of 92.3%. This meant they operated at full power on 336 days of the year, with the other 29 days being taken off grid for maintenance. This is compared to the hydroelectric system in the US which produced power for 138 days a year, wind turbines for 127 days, and solar electricity for 92 days.

Showing clear benefits of reliable production alongside producing no greenhouse gas emissions during operations and throughout its life-cycle. Clean air surrounds nuclear power plants. It’s therefore considered a clean energy for its lack of CO2 creation, however, it is regarded as less environmentally friendly due to the nuclear waste created and out of fear of major accidents. We are stuck in an extreme balance where nuclear works incredibly well as a producer of energy with neutral carbon emissions but with the potential for negative environmental impact if things go wrong.  Having a big ‘what if’ hanging over the nuclear sector’s head makes it often hard to see the benefits, while it is certainly understandable that an accidental event could be just as environmentally damaging as using fossil fuels if not worse. However, there has been plenty of electricity produced safely without these negative impacts, with around 440 nuclear power stations active around the world. At Highfield, we believe the nuclear industry is a way forward and helps support people in creating jobs throughout the lifetime of each station. This is why we are a part of the Sizewell C Consortium. Helping to get 25,000 employment opportunities and support British businesses with the construction of the proposed Sizewell C.Head to our jobs page to see what positions are available in the nuclear sector.

There is obviously a risk to everything we do in life, like getting on a plane or driving a car, and nuclear power stations are no different. However, 44% of people in March 2020 agreed overall that nuclear power provides a reliable source of energy compared to 15% who disagreed. While it may not yet be the optimal resource with current designs, it can be a viable source to bridge the transition from fossil fuels to renewables. Around 10% of the world’s electricity -2657 TWh – is generated by nuclear power, including France getting around three-quarters of its electricity from nuclear energy. Nuclear power plants can have a bad reputation, often due to a lack of understanding and education, but if we can increase the interest and participation within the industry it could lead us to a greener future.

New designs and concepts are being investigated surrounding the nuclear industry, with thorium being considered as an alternative fuel due to being three times more abundant than uranium and creates less nuclear waste. Alternative reactors such as Molten Salt Reactors are seen as promising, especially combined with using thorium and using spent LWR (light-water reactor) fuel.

Being a part of this positive future and making breakthroughs in designs and builds could be something you’re interested in. Or maybe you’ve never considered it. Now is a better time than any to be a part of this process and we can happily help you find your way. Contact us to find your next opportunity in energy and nuclear.